Can I have the opinion about dog crates...

being used for my rabbits? I was thinking about getting my Flemish Giant a large dog crate for her to stay in when we are not home. She is inside and usually has free range, but only when we are home. Has anyone else used these for furry family members?

More than a few here on RO have used them for cages. I would go with the largest one you can find (at least the XL).

It all depends on how many hours your rabbit will be in the dog crate. Dog crate works as a cage. My opinion for a giant, it would be better with an open area/ pen as a cage for them.
M

Well my Husband is home with her during the day , since he works from home, she roams free in the house. Mainly she sticks right near us. But it would be for short periods of time such as grocery store, doctor appointments, etc. I do not like to have her loose while I am gone. I feel better save than sorry, I would hate to see her get hurt. I meant one of those fold up dog cages.

There might be cheaper ones too, just took the first link I found.

Zaleia, I think you may be making the same mistake I did when I first heard people talking about "dog crates" for rabbits - there's transportation ones that are normally hard plastic with one door and fit in the backseat of a car (which is where my mind initially went)... but then there's ones that are meant to cage a dog for up to a few hours while their owners aren't home or something. The one we have is an XL dog crate (48x30x32'') and is great for keeping 1-2 rabbits in temporarily or for short stretches of time (like an hour or two). It also makes a great "home base" for a rabbit that's basically free-range - one-stop-shopping for their food/water/litter box needs.

I pulled this photo off of google for an example: 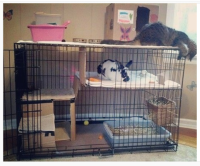 That is what I have in mind. She could go in and out as she pleases. And perfect for short periods of time, at least to me. Thank you for the information and the picture.

I have 2 of this which I used while bonding my rabbits. The work great and having the second floor gives them more room to bop around.

Imbrium said:
Zaleia, I think you may be making the same mistake I did when I first heard people talking about "dog crates" for rabbits - there's transportation ones that are normally hard plastic with one door and fit in the backseat of a car (which is where my mind initially went)... but then there's ones that are meant to cage a dog for up to a few hours while their owners aren't home or something. The one we have is an XL dog crate (48x30x32'') and is great for keeping 1-2 rabbits in temporarily or for short stretches of time (like an hour or two). It also makes a great "home base" for a rabbit that's basically free-range - one-stop-shopping for their food/water/litter box needs.
Click to expand...

Thank you for clarifying. That was however the type of crate I was thinking about. I think it's too small to house a rabbit, especially a large rabbit. It's my opiion and opinions were asked for
We don't crate dogs here, it's not a part of our culture and it's illegal to keep dogs caged/crated - although there are exceptions for short periods of time like a show or car ride or at the vet etc. I'm not so familiar with our laws regarding cage/kennel sizes for dogs since it just never comes up, but I know that dogs and cats are not crated in the same was I see happens abroad. (using crates for short times away is getting more common with problematic dogs though, I think.)
As for your meassurements, the cage would not be legal to house a flemish giant here. (area is just barely meeting the law, but the short side is too short). Not by far, but a tadsy too small. And I personally think the law minimum is way too small as it is - but I see where being more strict could rule out great housing options by technicalities so..

Anyhow, I'm rambling. I did read it was just for a short amount of time, but I question that a bit. If they are free roaming when people sleep, surely they can be free roaming when you're away a couple of hours? And if not - you sleep more than 1-2 hours a night so it wouldn't only be that time.

My personal opinion is that going out to get a dog crate for a rabbit is not the best idea. I would look for a cage where I'd feel comfortable locking them up at night at least, or if I had to get a pet sitter/place them with someone a few days etc. And I would not be comfortable to do that with a xl dog crate.
I'd also worry that that "once every blue moon" occasion would become more routine and then suddenly realize that bunny spends a lot of time in that crate.

Now I have a car-cage for a dog and that's smaller than the xl crate (its safer to travel in a smaller cage where they won't have room to ber tossed around in a crash) I use it when I take Dawn (my flemish) places and as a temporary cage when visiting friends. Usually she's not locked up in it, but lets say I visitet Sofie who does not have a bunny proof house, and we went to get pizza..then yes I would lock Dawn up in it while we went away.
I'm not saying anyone is bad for locking up a rabbit in a dig crate a few hours now and then, but I would go for a larger home-cage if I was to get a cage to use at home. Maybe building something to fit discreetly in a corner or nook somewhere if space is limited.
(unless transporting and mobility is a key point.)

It's my opinion I'm not putting blame to anyone who does it, but I would not chose this solution. 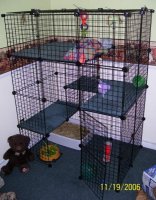 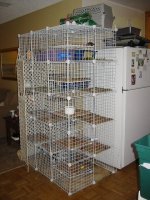 The other option is making a NIC condo. These ^ are pictures from google. It’s a great way to give buns customizable, unique vertical space without taking up a lot of horizontal space. I created a condo for when they were living in a 4x8 enclosure to give them more space, and they LOVVVVVEEEEED being on the top shelf and surveying the area. 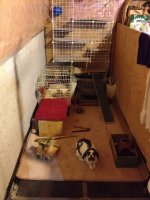 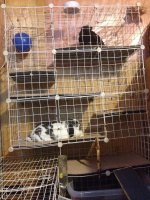 When I moved cities, however, I decided not to take the setup with me. I felt that it was old, tattered, and while obviously made well, it was also very obviously handmade. I wanted something that was seamlessly part of my home. A trend that has become very popular recently: upcycled cabinets! 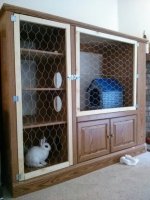 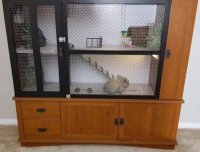 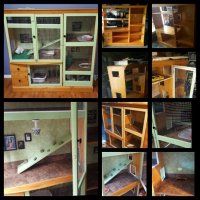 I spent a lot of time looking for a cabinet that was not only tall and wide but also deep. I finally settled on a 3pc entertainment unit. 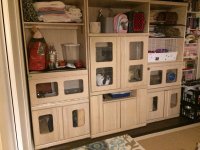 The top bits originally came with glass doors, which obvs are no good for ventilation. I was planning to replace them with plexiglass that had holes drilled into it, but it turns out plexiglass is very expensive and it was cheaper to buy diamond drill bits and drill holes in the actual glass! Two of the doors broke in the process of getting the unit from the previous owner, so they still gotta be replaced, and I just got the other doors installed on the top cabinets. Now I gotta finish the flooring and make ramps and they’ll have the entire thing to themselves!

They don’t live in it full time by any means, they have a full room of the apartment to themselves that I now trust them to run around in 24/7. But if one of them needs to be confined, or separated from the other for a little while, it’s easy to use the modular nature of the unit to block off sections. Both the bottom two shelves have litter boxes with an attached hay rack, and a water bowl on the shelf above.

I’m not sure how helpful any of this will be if you have a Flemish giant, as they need a lot more space than my tiny dwarf and mini lop, but the customizable nature of the NIC condos might be a good fit for you.
You must log in or register to reply here.
Share:
Facebook Twitter Reddit Pinterest Tumblr WhatsApp Email Link