Can a rabbit's tail be dislocated?

I was just wondering, a bit nervously, if a rabbit's tail can be dislocated by accident, and if so, how likely would it be? I feel like an idiot asking this question, but i want to be on the safe side of things before rushing into assumptions.
The thing is, i did kind of a dumb thing- i was on the bed, grooming Storm's lower back&outer feet, i had a weak hold of his tail with one hand while i gently plucked loose fur with the other. His most shedding fur is right at the base of the tail which is usually hidden by a flap of his skin and fur, so in order to get there i have to hold Storm's tail out a little bit. My dad came from outside, scaring Lümi, which scared Storm, and also me, so i wasn't able to react fast enough, which meant that Storm tried escaping, leaping off the bed with me still holding his tail. Of course i let go the fastest i had realised what was going on, and for safety's sake i led him around with pellets to see if his tail acted normal.
It almost did, but was just a little bit outstretched, looking almost as if Storm were about to pee, but the tail didn't really wiggle around to his hopping. (Not that it ever had crazy visible movement, but still.)
He turned around and tried to run away when i pushed his tail around with my fingertips. All other activities have remained unhindered. There are no evident signs of pain either.
Should i be worried or is it me being overly paranoid about his safety and wellbeing?
Last edited: Friday at 2:59 PM

Yes, it's possible for it to happen, but I believe it would be considered more a break than a dislocation as it can't just be popped back in place. I would think that if that is what happened, the tail would clearly be at an angle. Maybe just monitor it and if you see anything wrong or have concerns, phone your vet.

Well, his tail is attached to him as it always has been, i'm able to move it around back and forth, as i doubt that a rabbit will always at all times have its tail straight in the middle like a stick. Although he sometimes likes to hold his tail not-so-straight too, so it makes it hard for me to tell the difference. I have noticed that even Lümi will sometimes have his tail tilted...

If the tail was at an angle, would it be more at the tufty end or the spinal&tailbone end? 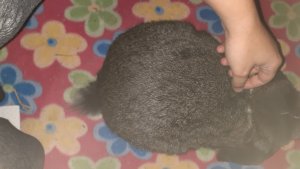 This is his tail now.
Perhaps it is not so straight after all.
It was almost totally straight when he was doing the superman pose though.

That's from early summer.
Now i'm confused. What, exactly, should i look out for (apart from obvious signs of pain, abnormality in eating and pooping) ?
What would the vets usually do in such cases?
Last edited: Friday at 3:32 PM

Think of when a human has a dislocation. It hangs at an odd angle and they have no control over moving the limb and it's function. It would be like that. Also if there is no pain response to you touching or moving the tail, then I would doubt it got injured. A dislocation/break would cause a significant amount of pain and/or discomfort.

Well he moves his tail around: lowers it when leaning forward, flattens it when supermanning and tosses it along to his side when he flops. So i guess he's got the movement part completely functional.
So i can safely conclude that nothing major or particularily harmful happened. I can sleep at ease!
Thank you so much for the fast reply!

If the tail was broken you’ll know, after it heals, by running your fingers along the tail from the base to the tip...you’ll feel a small knot somewhere along what should be a smooth tailbone.
You must log in or register to reply here.
Share:
Facebook Twitter Reddit Pinterest Tumblr WhatsApp Email Link