Fairly new to owning rabbits/bunnies, and I'm concerned about my male Netherland Dawrf Rabbit - I'd really appreciate any input.

He is quite young (8 weeks now), and today I've noticed some abnormal behaviour. His right ear is flat against his head. I don't mean his ear has gone floppy or anything, his left ear is normal, it almost seems as if he's hurt said ear. Its quite literally flat against his head, like he isn't able to move it...I think its causing his head to tilt slightly as if its heavy, but maybe I'm overthinking this. He is still fairly active, eating drinking, slightly lethargic, a bit low on energy but still very alert. He's on my lap as I type this, alert & being his usual sweetheart self. Yet he seems uncomfortable and something just feels 'off'. He's been sleeping a lot more today and seeking extra comfort from his sibling. Upon closer inspection I noticed a scab on said flat ear. Not quite sure whats happened. Does this call a vet visit? Could this be an ear infection? Please let me know your thoughts. A town trip is planned for Friday so he could be taken to the vet if its serious, and if that's the case what I can do in the meantime to help him? I have attached a couple of pictures that hopefully show what I'm talking about. 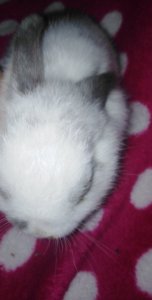 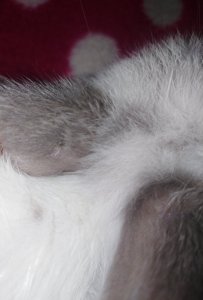 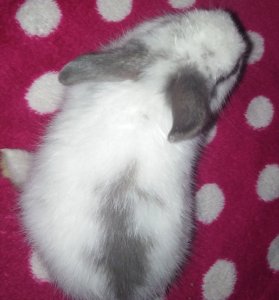 It sounds like an ear infection to me, I would take him to the vet before it gets worse.

BTW-Welcome to the forum! Please take some time to introduce yourself in the "Introductions" Forum.

Is he just sleeping with it like that or is he keeping it pinned back even when he hops around? Any reduction in appetite or any tooth grinding going on? Does he seem to be keeping his head tilted? Is there a bad smell or can you see any irritation or debris from the ear canal?
A

Mariam+Theo said:
It sounds like an ear infection to me, I would take him to the vet before it gets worse.

BTW-Welcome to the forum! Please take some time to introduce yourself in the "Introductions" Forum.
Click to expand...

Okay yep he will see the vet this Friday. And thank you!

JBun said:
Is he just sleeping with it like that or is he keeping it pinned back even when he hops around? Any reduction in appetite or any tooth grinding going on? Does he seem to be keeping his head tilted? Is there a bad smell or can you see any irritation or debris from the ear canal?
Click to expand...

Its pinned against his head with everything that he does, sleeping, hopping around etc. I think there may be a reduction in appetite, as I haven't seen him touch his food this morning or nibble on any hay. Head does seem to be kept slightly tilted on the side with the pinned ear. I just looked inside his ear, no bad smell/debris or anything but there are two small (what looks to be) puncture wounds that have scabbed over...? Bit puzzled. Ear seems to be a bit red too. Have attached a photo. 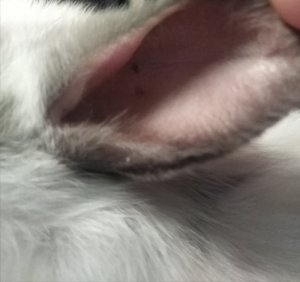 If he's stopped eating, then you need to get him to the vet right away. It's not good for rabbits to go more than 12-24 hours without eating a significant amount, or it becomes an emergency situation. I would get him in to the vet today as an emergency appointment if necessary, or he could develop GI stasis as well.

It sounds like he does have an ear infection, so will need the proper rabbit safe antibiotic, meloxicam(NSAID), sub q fluids if he's dehydrated, and you will also need the vet to send a rabbit recovery food mix home with you so can do regular syringe feeds until he starts eating again on his own.
Medirabbit (ear infections in rabbits)

Thanks for the links and I appreciate all your help.

Have kept an extra close eye on him today. Drinking normally, happily munched on freshly picked grass which was a relief. Unfortunately the soonest I can get him to the vet is Friday, due to being out in the middle of nowhere and the vet being a long trip away. Have got some penicillin left in the fridge that was used on one of the horses...would this be safe for him in the meantime? Or is it a no go?

This link was shared to me as one of my boys is currently facing an UTI and we have a sus vet here:

As long as he's eating normally, I would just wait until your appointment Friday. Just be aware(as you'll see in the link posted by Catlyn, penicillin should never be given orally to rabbits. It is only generally considered safe if given by injection, but even then does have a possible risk with it's use.
T

When I first got haru (Lionhead) her right ear was always down and I never saw her move it, I looked it up and they said that she could be half lop or that her ear was injured, when I took her to the vet he said that she was okay and that she is probably half lop. Now her ear got up by itself and she’s moving it just fine. So she’s not half lop, I don’t know what was wrong with her, but it was fixed by itself. Another vet said that she has nerve problems in that ear, but I don’t think that she has any problems
You must log in or register to reply here.
Share:
Facebook Twitter Reddit Pinterest Tumblr WhatsApp Email Link