Hello! I have a 10 month old Fuzzy Loprabbit named Teddy whom I love dearly. I got him about two months ago, and whilst ive been doing research on rabbits for over half a year, this is my first time owning a rabbit, and im fairly (overly) anxious (paranoid) about his health and wellbeing so ill probably be asking around a lot ^^'. As he is a long haired rabbit, he needs a looooooot of brushing. And for the most part it's easy! He's calm around me most of the time, and if I rub his head for a bit I can use one of my brushes (I have like ten, I use the hairbuster mostly) can go through his back and sides without a hitch. The main problem is his belly though. When I first got him, in late December, his belly fur was already fairly matted and it hasn't gotten majorly better since then. Teddy doesn't mind being picked up for small stages, though I try to avoid doing it, but I am finding it very difficult to brush his belly without trancing him. Teddy also doesn't like being brushed on his belly either, and after I've failed at doing it he will be wary of me for at least a few hours, depending on how long and how I've done it. He also has tried nipping me a few times afterwards, which I am unsure if he is trying to assert dominance or 'untangle" my clothes, as it has happened mostly on my pants and shirt. I've been wondering about the 'bunneto" or whatever its called, where you wrap the bunny in a towel, but I was wondering if that would even work because it is mostly on his belly and butt? I've also wondered about just shaving the belly, but I am not experienced enough to do it without worrying about cutting him, and we do not have any rabbit groomers near us, and I don't want to call a dog or cat groomer and have them answer "Oh, so a rabbit??" Any help or ideas will be greatly appreciated, and I'm open to any suggestions! Thank you <3 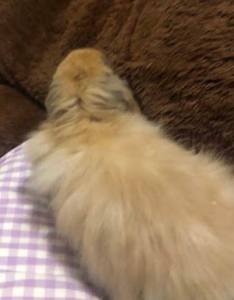 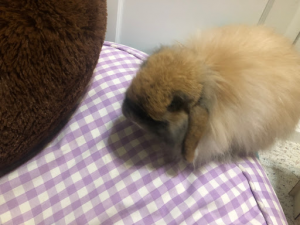 He is a cutie. We have a young girl with similar hair. Am trying to gradually accustom herto light brushing with asoft baby brush. She still wont let me brush her underside either.
T

Thank you! I will try and brush him lightly to get him accustomed.

I have the same issue with my Holland lop- not being able to brush the belly or feet very much, because he’s skittish to be held. He’ll do pets & climb on a stationary person, but holding him is a nope.
I asked the vet tech about grooming when I went to get my 1 of my bunnies nails clipped (1 of them refuses).
She said: never ever go near a bunny w/ a razor or scissors b/c their skin is like tissue paper.
Use a soft brush (not the metal one) OR a sticky lint roller for the legs & belly; hold firmly on your lap with hand support & have someone else groom the under areas or take them to the vet or try the bunny burrito.
only be concerned if there is poop or other stuff in the hair. Check the bunny’s belly when your bunny flops.