I had just bonded my lionhead Bambino with another lionhead, Bunilla Ice that I adopted last week or so. Bambino is just turning 1 years old and Bunilla is 4, it was my first time bonding but both already appear to groom and sit by each other. I started to allow Bunilla free roam of the main bunny room along with Bambino but Bambino appears to be acting differently. Bambino wouldn't be as active as Bunilla, usually sitting in the same spot, causing her to go up to him and nudge/groom him. After a vet visit for his front teeth to be trimmed ( something I had already planned) we find out his back molars are getting too long, but with his front teeth trimmed he should be able to chew more. After the teeth trimming he was bouncy and running around like normal but would only eat his critical care. However he seems to still not eat or chew on his hay and had started to eat less pellets and instead sits in the hidyhole of the cage. I noticed he also started going bald around the back of the head.
We also unfortunately found out yesterday that he has an inoperable cancerous tumor on the side of his head. While it doesn't appear big could this just be his reasoning for acting unusual or is the stress and change of a new bunny in his room?

We have multiple litter boxes and food bowls and we have tired different hay types and treats for wearing down teeth. Give them both equal attention and they have never shown signs of an towards each other. 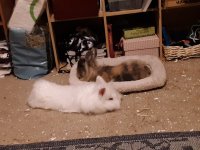