My bun likes to sit, flop out, and generally hang near her plate that I serve her food on. It's hilarious! I also catch her, quite frequently, digging onto her plate.

I've seen thousands of suggestions to use newspaper as a toy, that buns like to shred and dig into it for fun. So I decided to try it.

My 4 month old doesnt get it. I've stuffed the newspaper in boxes, put it in her hidey places, bunched it up like a ball, laid it flat in the open, laid it in her favorite areas and even on her plate.

She refuses to do anything to the newspaper except eat it. That's it. I'd be okay with it if I didnt see ton of warnings saying buns shouldnt digest tons of newspaper.

Any suggestions to why she's doing it? Or how to help her have more fun? I feel bad, since most of her toys go unused. She just...doesnt play? Idk I just worry soemtimes and want her go get enough exercise and I sometimes feel lile she should play more and doesnt.

Any advice if appreciated!! 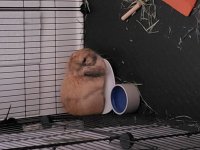 My rabbit eats newspaper too. It is completely harmless!

My rabbits like eating newspaper and normal paper too, but I've never had issues with them not playing except for one. He's 7 years old and kind of a grump. He never really enjoyed running around or toys until we got a new rabbit (she was around 2 months or so). She would run around like crazy and he'd follow her and just act like a crazy bunny.
If your rabbit is an only child, maybe get another? I get you might not be able to do that, so my other advice would be to maybe play with him yourself as much as you can.