Has anyone built their own outdoor rabbit run? I was wondering if I could get some advice or tips/tricks that you've learned. I'm doing this from scratch unless something better appears.

I haven't priced it out yet, but I'm thinking that I'll make it with 2x2 planks and wire for the sides. My original idea was 4'L x 2'W x 3'H and to make 2 of them- that way they could be pushed together for an 8'L run and easily moved when she's ready to come in. All sides (except the bottom) will be wired in and it will have double hinged lids on top for easy access. I plan on being outside with her while she's in it. We do have hawks, hence the top being wired and lidded.

Any thoughts or advice on construction vs just buying a run at a brand pet shop? She's a small bunny (8 weeks, Holland Lop/Hotot cross) but she's a binky parade already and barrel rolling all over her pen as is. I'd love for her to have more space to dash.

IMPORTANT EDIT: Just noticed that you are in California. That is one of the states affected by the recent outbreak of RHDV2 (rabbit hemmorhagic disease). Due to this outbreak, it is being advised to keep pet rabbits indoors.

Creating an outdoor run is a fine idea.*(see edit above) Fortunately you have plenty of time to design and build one. Since she's only 8 weeks of age, she shouldn't go in a run yet because eating loads of grass would be considered a diet change and could seriously upset her tummy. At 12 weeks, she can begin to be slowly introduced to greens as part of her diet. As you see how she does with that (during the several weeks following that 12 week mark), you can begin to consider allowing her outside in a run to explore. In a run of the size you describe, she'll likely be doing mostly exploring.

For exercise and binkies, indoors is a fine place to do that. This can be done by bunny-proofing a room (or more) and letting her have at it. If that can't be done, then a 2nd pen can be attached to the one you have to make a larger space. OR, even a single pen can make a space as large as (or larger than) the 8' by 2' run you are considering. The following photo shows how a single pen can make a large space by making use of an existing wall.

If you decide to make your own outdoor secure run, you'll have the advantage of making it collapsible or modular if you like. The pre-made ones may not have the versatility you may be looking for. It really depends on how custom you would like it to be. I'd encourage something wider than 2' though. With your current dimensions, the 2 runs together make just 16 sq ft. By comparison, the single pen in the attached photo has around double that space. 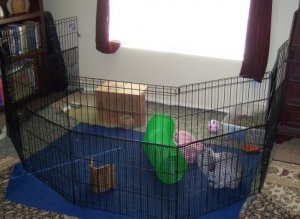 Just for fun, here is a video showing some buns getting their binkies and exercise indoors (where they are comfortable and feel safe):

Those are good points about the run size and about the grass. I haven't bought anything yet, so I can widen it the plan a bit. I guess it gives me time to plan it out just right since she's so small. Unfortunately my living situation probably won't be ideal for free roaming outside of my room, at least at current. Hopefully I can make up for that with a shady front yard playground.

@Spectralmoon , I've edited my above post when I noticed you are in California. Due to the recent outbreak of RHDV2, rabbits should not be let outside at all.

Blue eyes said:
@Spectralmoon , I've edited my above post when I noticed you are in California. Due to the recent outbreak of RHDV2, rabbits should not be let outside at all.

There has been much in the news about RHVD2 (Rabbit Hemorrhagic Viral Disease) spreading in the United States. It is a very contagious and deadly disease caused by the calcivirus. It kills swiftly and with little warning. Until 2020, it was not known to affect the wild rabbit population in the...
www.rabbitsonline.net
Click to expand...

Speaking from the UK, our advice is that all rabbits need to be vaccinated whether they live indoors or outside. There are so very many ways this virus is spread, it's airborne, it can be carried in bird droppings, it can come into homes on owner clothes and shoes, skin and hair, it can be on the fur and feet of other pets that share the home, and biting insects spread it. No rabbit is safe without vaccination. My own rabbits live largely indoors but I wouldn't fail to keep their vaccinations up to date. Before we had vaccine here in the UK we were advising people to have footbaths beside every entrance to the house, that outdoor shoes and outer clothes should be discarded at the door and taken straight for washing, and that no rabbit should be touched without first thoroughly washing hands. Paws of other pets such as dogs should be washed before they got anywhere near where a pet rabbit might go, but even then, it can be carried on their fur, so is a real danger to unvaccinated rabbits.