Hi all, I was hoping someone could provide some help in identifying how lucky/unlucky I will be with my doe's next litter by providing information on the previous litter (unfortunately unsuccessful) And if anyone can let me know if i'm on the right track this time as I now have time to prepare / educate myself on the whole process.

They live indoors in their own room, both separated by a puppy play-pen. I should note Silver has just been neutered (January 23rd) - they will remain separated until at least mid-march. Ginger has recently had a litter, and two weeks post giving birth, I woke up to loud noises and found them together in her part of the room! I do not know how long they were together but it must have been a couple hours.

A little background: My doe (Ginger) had a surprise litter January 7, 2019 at 5PM EST (apparently unusual for a doe to birth so early?). My boyfriend came home and found the babies scattered in their bedroom (one had even crawled under the door out into the hallway!). Anyways, long story short the living conditions the bubs were born in were far from ideal. One had been stomped on by Ginger as soon as they were born (there was a lot of blood - it was terrible!) but the four others were like jumping jelly beans. To our regret, one by one they passed away, the biggest one (born at 1.6 oz) lasting up until day 17. We both were inexperienced, and I only wish I knew what I knew now then.

Here are my questions:
Question 1: Could someone help me identify whether the bubs below (Image #3 & #4) were peanuts? One weighed 1.6 oz at birth, the other three weighed (0.9, 1 and 1.3 oz) - Would that make those three "peanuts"? *to note: I weighed them all and none of the smaller ones gained ANY weight throughout the days of their lives... Question 2: Should I be concerned with Ginger not feeding again?
Question 3: If she gave birth to multiple peanuts (I heard that was sort of rare...) Is there is a big possibility that she will have kits these small again?
Question 4: Does this mean that Ginger is a 'True Dwarf'?
Question 5: Considering they were together for a presumably prolonged period of time (let's assume an hour or so) before being separated, how big could the next litter be?

This time I have a Bunny Birthing Box that I will be presenting to her three-five days before she will be expecting (when she starts to nest) and a heater to keep the room warm (it's -35C where I live). I'm afraid the last one (the largest of the kits) may have passed away due to a cold spell we had that day. The thing was that it was absolutely fine when I saw it that very afternoon and the next morning the poor bub had passed... He was SO cute and was completely active, with a big belly, super curious and loved to nuzzle - his passing really affected us. See Image #5

I hope the images work.

If anyone has any advice / recommendations to make Gingers time easier (Question 6: Are two consecutive litters hard on a Doe?) it would be very much appreciated.

The advice I find online is very... far from pragmatic I guess. The best advice I've found are from experienced rabbit breeders word-of-mouth. But everyone has a different experience and I acknowledge that.

Thank you so much for reading and sharing your thoughts!
Clara 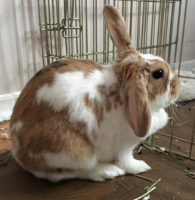 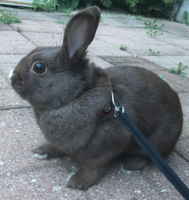 Image #5 - Bubba, Day 15 (He passed away two days after this picture was taken)

It’s not a big chance of getting a whole litter of peanuts it’s quite rare getting peanuts. Because they have to get two dwarf genes one from mom and the other from dad.

Just something easy to read about dwarfs genes.

I would be more consern with if your doe will be a good mother. Some does aren’t fit being a good mother or she wasn’t ready to have kits, or it was too stressful making her unable to take care of her first kits. Quite a lot can make the kits not survive.

If you notice again that their weights aren’t going up, you can also try feeding them (bottle feeding) or helping them.

I know most breeders often use false dwarfes in my country and breed them with true dwarf, to avoid getting peanuts in their litters.

I would also question whether your doe would be a good mother. Your buck doesn’t really look like a netherland dwarf. The kits don’t really look like peanuts, but one does look a little thin on day 2. For Bubba, it looks like the doe stopped nursing him...either that or he had genetic issues that caused him not to develop properly. All that being said, your doe might do a better job the second time. A nestbox is needed to contain the kits. Make sure there is hay and mom has pulled hair to keep the kits covered. Until they have a good coat of hair they’re very susceptible to dying from cold temps.
You must log in or register to reply here.
Share:
Facebook Twitter Reddit Pinterest Tumblr WhatsApp Email Link