I have two rabbits we got in the spring. They were neutered at the beginning of June. We gave them time apart to heal.

They have been living together happily (so it seemed) since then.

Since the weather cooled down (below 80, above 50) we've let them run outside in our yard and they seemed to really like it. They have plenty of places to hide and play.


This morning, George started chasing Littley and pulled off a bunch of fur and then began eating the fur.

Now George is pretty lethargic and won't eat or move.

Littley seems to be ok -- eating and moving.

Do you have any idea what may have caused the sudden change?

They've been playing outside for a couple weeks now and we haven't had anything like that happen.

I attached a couple pictures.

Wondering if they could have mites and if that could be making them not feel good and bothering each other?

With bonded rabbits, particularly with newly bonded rabbits, changing locations can cause their bond to be disrupted. Giving them a sudden increase of lots of space can cause them to claim certain territories within the larger space. That is one possibility that could explain their behavior change. (Are they both male?)

If one is not feeling well, that can also cause changes in bond behavior.

I'd suggest bringing them back inside. It's supposed to be pretty warm today anyway (87F). Let them "get acquainted" again in the area they've have been together since they first bonded.

I'd keep them that way for a couple weeks minimum to try to cement their bond.

In the future, if you do decide to let them out in our cooler weather, I'd suggest keeping them confined to an exercise pen (or a couple attached together). That will limit their space and should prevent potential territory issues. Also, it really is imperative that someone is sitting outside right there with them whenever they are outside. You may have been lucky thus far, but it doesn't take but a moment for a hawk to swoop down and carry one away or for a coyote to hop a fence.

I've occasionally let mine out. This is how I used an ex-pen to limit the space. But i haven't let mine out for a couple years. You may not be aware, but there has been an outbreak of RHVD2 in AZ and the House Rabbit Society is warning people to not let their pet rabbits outside at all. You can read more about that here: 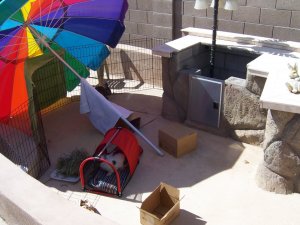 @Blue eyes Thank you so much! That's really interesting that more space would cause territorial problems. I would have thought the opposite. We'll definitely keep them separated until they've recovered.

One thing that seemed odd is I found the two of them "snuggled" together just before it happened. And that's pretty normal for them when they're out together. I can tell they don't always want to be together, but they are generally near each other most of the time.

They are both males, but I figured being neutered for several months and being together since then would have minimized any issues.

We do have two exercise pens so I'll give that a try!

And thanks for the heads up on RHVD2 as well!

I really appreciate the feedback!

Just to clarify...
I don't suggest separating them indoors unless they are still not getting along. If they are ok together indoors, then it's best to leave them together and let them cement their bond indoors.

Keep an extra eye on George, who's stressed, to see that he starts eating more again. Stress can cause a rabbit to go into GI stasis, so we don't want that to happen with George.
G

Thankfully George started eating a little bit afterward. I think he may have just been exhausted.

I figured I'd separate them for today, maybe tomorrow just to give them a little time to recover. But I'll definitely get them back together after that.

Do you think it would be better to put them together inside right away? Even if they still have some tufts of fur out of place? They don't seem agressive to each other. They can see each other but can't touch each other right now.

If they aren't being aggressive, then separating them can cause more harm than good. You want them to stay bonded, so as long as they are good together, they should not be separated.

It sounded like they bonded indoors and spent most of their bonded time indoors together (until weather cooled)? If that's the case, then moving them indoors again should mean they remember being together and bonded there.

Make sure to continue to keep a close eye out for lack of normal activity and lack of appetite like Blue eyes mentioned. If he doesn't start eating more normally within 12-24 hours of the last time he ate normally, it's considered an emergency and you will need to get him to the vet. It's possible the lethargy and not eating wasn't due to becoming upset but from ingesting the fur which can result in a intestinal blockage if an excessive amount was ingested.

Thanks so much! We put them together again for a little bit but they still seemed apprehensive and I didn't feel comfortable leaving them. We'll try some more time again together tomorrow.