Any ideas for good toys/distractions when free ranging?

I’m looking for ideas for toys that would be good to provide enrichment and distraction when free ranging bunnies around the house so they avoid chewing and digging carpets or furniture. I’m trying to avoid things that are too messy or filled with hay etc for outside of the cage area. Anyone have any good tips? Thank you

If you youtube-search "paper tube toys for rabbits" then you will find many videos from channels like stormyrabbits, 101rabbits, lennonthebunny and others.

http://bunnyproof.com/top-10s/top-10-free-toys-for-rabbits
https://www.thesprucepets.com/toys-for-pet-rabbits-1237198
Some pages that also have good ideas.
If you need more, shuffle around pinterest for extra ideas.

The best thing for my rabbit for not digging or chewing furniture carpet is making sure that the carpet is plain-no frills or raised spots or long fibers. Give your buns their own special carpet to dig and chew; my bun loves his. Some old, clumply pollow will act the same until contents are not consumed.

When there is lots of room, I find that rabbits love to explore tunnels, hideys, etc. Large boxes with doorways cutout, or towel draped over something... anything large they can explore. Afraid it doesn't do much for your decor 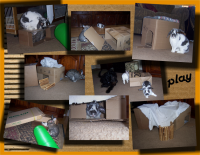 We use cardboard boxes too! They love to explore! We also have a “dig box”. I found an extra small, plastic kiddie pool, and we have crumbled up packing paper, toilet paper tubes and paper towel tubes and a few apple branches in there. They jump in and dig around. They pull the crumpled paper out but it’s not messy bc it’s that thick paper you wrap glass stuff in when you move. Not a bunch of tiny pieces of paper. If you really want to keep them busy in the dig box- put a few of their favorite treats in there and watch them look forever! LOL (Just be sure they are fully litter trained and not make it one big litter box!). I may find a few stray poops in there from time to time but mine don’t pee In it.
I also have a pack of paper lunch bags (50 for $1 at dollar store) and a roll of twine. I put a small handful of hay, a few pellets and a treat in them (dried papaya is good) and cut some slits in them so they can see and smell that there is something in them! Tie the top closed with a piece of twine and wa-la! They will toss them around and chew and dig on them for a while...and it’s great entertainment watching one take the bag from the other! At first I had to cut some big slits in them until they understood the concept. Now, they look for the play bags!
I also have the “treat ball”. They will push, toss and chase that thing to get the treats to fall out. Again, great entertainment.
I don’t give them all the toys at once so they don’t get bored. We switch it up every day with different stuff.

The easiest entertainment that works for my bun is just a tp roll folded inward with treats or pellets inside. Jingly cat ball gets tossed around too, and paper bags hollowed out.

Thank you everyone these are great ideas. I accidentally built an obstacle course this afternoon which seems to be working great. I was trying to block off all the edges to the carpet which were most problematic so I moved all my storage boxes to block it and they seemed to love hopping all over them. It’s not the most attractive solution will be fun to explain if we ever have guests around but seems to help! They still sometimes have a go at the carpet in the middle but it’s not as bad as when they get hold of the edge once they start on that you have about 3 seconds before they pull it up and shred it haha.

Yes cardboard boxes are the best! I cut a little hole in one side and sometimes put crumpled paper inside. I call it Harvey’s fort. No Humans Allowed!
She wides the doorway, and chews the inside and shreds the paper. All the paper mess is mostly contained inside. The heavy duty ones are great as there are so many layers of cardboard for her to chew while protecting the carpet.

Other poster is right, they look ugly sitting in your living room. But you could make or buy nice wooden rabbit forts. Just add cardboard and paper and other chewies inside. When not napping in her dog bed she loves working on ( destroying) her fort.
You must log in or register to reply here.
Share:
Facebook Twitter Reddit Pinterest Tumblr WhatsApp Email Link