I truly apologize for the double post; I was playing with the baby bunny, which is Oreo's only surviving baby, and I just saw it had caked on, hard poop covering where it poops. I needed to forcibly remove it using a baby wipe and warm water. However, there is some very hard fur that I could not clean because it seemed to hurt the baby.

How worried should I be? The bunny has been nibbling on orchard grass for days, and I provided water a few days ago. But I think Oreo keeps drinking it Otherwise, the baby is trying to run, climb, binky, and is very curious. Acts 0% sick, but wondering how this happened? Just now, Oreo was grooming its poopy butt <3 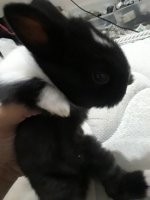 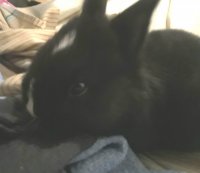 Hi there, not to worry sometimes babies will take some time to figure out they have to clean up after themselves, it also helps to ensure Mama is still cleaning them during or after nursing as well to teach proper hygiene to the baby.
An easy method to help out is to make a sits bath for them and have their bottoms soak in it for a few minutes to soften the dried & encrusted fur. I suggest some straight chamomile tea (I say tea, I simply mean nothing other than chamomile flowers - pic included of the brand I use - brewed with hot water and allowed to cool to a comfortable temp test on the inside of your wrist) and a washing basin shallow enough so that you can hold them comfortably and their feet are resting on the bottom. About 2 - 3 inches of the tea is all you should need. After soaking just their bottom for about 10-15 minutes, you have to hold them still during this process - thumbs under the armpits and back of hands behind their back I soothe mine by cooing to them and gently stroking their faces during as well...they will sit better and longer for you, you should be good to go with some gentle wiping of the area with a soft dry washcloth or towel, I dont use baby wipes due to the chemicals.
Babies dont tend to actually eat much hay at this stage and are solely dependent on Mamas milk for their nutrients they will nibble and investigate pellets and veg as well as hay. Try to limit what they get into if this is a domestic bunny as their digestive tract is not setup for processing them very well yet and too much can make babies sick.
Best of luck and let me know how this works for you!

Thanks so much for the help! Will get the tea after work today Baby is half Lionhead, so I suppose poopy butt should have been expected.

One more thing, please: to me it looks like the poop is stuck there in the poop hole, almost like baby is constipated. When I cleaned the poop, baby's butt was kind of red. I mean, if baby was constipated, it would be acting sick and poop would not come out, I guess. I think I am having a hard time describing it, haha. Just wondering why the poop does not just fall on the ground.

Again, the baby is very active, squirming when held, exploring, running a little and climbing.

Your bunnies are so cute and sweet! Do they love kale?

They do love kale, but its high in oxalic acid and needs time to be processed... I try to rotate oxalic greens and only give them every 3-4 days depending in what I have in the fridge.
I did forget to say previously you can also put a touch of baking soda in the sits-bath water. This will soothe and prevent bad bacterial growth as well if there are any minor scrapes and such. Just make sure to dry and fluff fur well, I feel like that's the worst part of it for them having to endure the excessive drying and wanting to go and scamper off, tired of being held. I'm pretty meticulous when it comes to this because of the undercoat and making sure that there is as little moisture remaining next to their skin as possible. I also put mine in front of a fan and fluff as well so they really just put up with me doing it after awhile but nobody likes it!
I have a feeling that your little guy isnt constipated probably just has a dried down situation. They have a mucosal layer (much more obvious in newborn babies - observable in juveniles and adult from freshly exited droppings 'glistening vs. dried') surrounding their droppings which make it easier for them to pass them this probably dried to the skin. If hes dehydrated because Mama has gotten the notion of stopping nursing, which does definitely happen too trust me I had one think she was done with that portion of her life when a litter was only 2wks old, then this could be an issue as well as he will have less mucous production as a result and harder droppings as well.
As he's so young it's really critical to monitor interactions between Mama and baby especially if shes a bit neglectful. I have had Does that I've literally had to put their babies gentials in Mamas face after stimulating them to go potty and teach them that they need to clean their baby after they feed them. Some need that kind of Mommy coaching some dont, but I always check my kits to make sure.
Dont let it go too long though if it really is dried and stuck in there he could compact and it could back everything up and become life threatening.
You can stimulate muscle spasm for the release by applying gentle pressure on either side of the hole. With him in your arms body cradled against your chest, belly up, head in the crook of your elbow, holding and cradling with your non dominant hand and arm, use your dominant hand to cup his rear... thumb and forefinger should make a 'V' pointed towards his face to come up from his underneath his tail. One finger on either side very gently apply pressure like your rolling down a sock, if that makes sense, you will see the muscle spasm and attempt to force any droppings out.
You can also do a tummy massage with him face down on your lap settled on your knees to help with any blockages or impactions. Non dominant hand will hold him securely behind his head and placed on top of the shoulders. Dominant hand will cup his bottom with your forefinger and middle finger, or middle finger and ring finger whichever works better for you, (thumb will be around his tail and probably over top of his hips) underneath and between his legs, you will be touching his belly, suspend his back legs up and off your knees and curve your 'belly fingers' upwards, like you would try to tickle under a chin, applying gentle pressure backwards towards his business. Be careful as to how much pressure you use as they are delicate and if there is any blockage you dont want to hurt him. Just coax and massage gently for a couple of minutes. Make sure to put him in the litterbox when you put him down and insist he stay in there for a few minutes he'll probably have to go pee at this point anyway since the bladder is being stimulated doing this as well.
Another thing you can do is trim the area with some small scissors of the excess fur to prevent any matting of fur or stuff getting stuck for the time being until he gets better at cleaning himself. It'll grow back so dont worry.
As far as the redness concern hes probably just chafed from when you were cleaning him previously. Their skin is very delicate and as babies more so than adults, think of tissue paper, it's a sensitive area anyway, so the softest washcloth you have and the more fluid the better.
For very young newborn babies I dont even use that when needing to stimulate potty time just the running warm water and tip of my finger. Then back in with mama making sure she cleans them well before she goes about her business and they either eat or go re-nest.
Good luck!

Thank you soooo very much for the help. You are a gem to this forum. Thank you again